Limbo Wiki
Register
Don't have an account?
Sign In
Advertisement
in: Characters, Player Characters, The Underdead,
and 3 more

She is the proprietor of Soleil Sporting

Alexys Ocantian had a rather normal childhood. She was a good student, a bit of a hermit, and thats about it.

After secondary school, she went to med school. She decided this wasn't for her and instead transferred into other courses. Alexys became a geneticist.

Alexys married her husband in 2000. They had two twin daughters, Amaria and Cora.

Alexys was kidnapped and murdered in 2020, dying on the 12th of January.

When Alexys woke in Limbo, she was rather unphased, simply saying 'So, what do we do now?' to Lastsume. Eventually Alexys finally left her house hall and wandered around Limbo, ending up in the Red Light District as the Underdead was being formed. This marks her first actual achievement in life or death.

The Underdead accepted her with open arms, despite her bad attitude and constant pushing them away. Secretly, she quite enjoyed their company, but letting them see that is emotional vulnerability so of course she hid it.

She dislikes angels and demons and treats almost any immortal with immense sass and little regard for her words. This proved to be a 'bad idea'. At first, with Yarindael, this simply caused minor fights and small rifts. But later, with Allocen or Xyval, this resulted in her getting shot, two attempted drownings, her chest getting sliced open, and spending 30 seconds in the Void.

Alexys writes regularly, despite having to re-learn how to after the Void. Yarindael helped her, so now they have pretty well matching handwritting.

Despite her extreme aversion to emotions, Alexys tries to be a decent friend to those who will allow her to.

On another note, she summoned The Bloodfather (literally Dracula) because a demon was humming a duet with her.

When Pestilence released the plague on the immortals, Alexys quarantined herself and Yarin in Zorn. She attempted to understand the disease to no avail. It didn't operate under the rules she knew.

There was also some time where Alexys nearly swooned for War, but that didn't last.

After little deliberation and many long comas, Alexys and Yarin decided to tie the knot. This resulted in her finishing her unfinished business of getting over her husband, and nearly moving on. Thus, the Transcendent Wedding occurs

During the destabilization Alexys had a flashback too when she met her team of Lysander, Willa, Percy, Kate, Frankie, Johnny, Eamon, Nora, Herbert, and Ruby 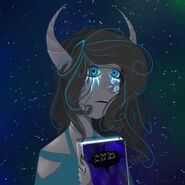 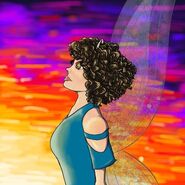 Alexys as a Wight
Community content is available under CC-BY-SA unless otherwise noted.
Advertisement