Formerly a Virtue of Heaven

Formerly a Prince of Hell

Formerly a Duke of Hell

Allocen is the former Duke of Hell in charge of Limbo's day to day.  He was stripped of this rank by the Zythar Heresy and awaits trial.

Allocen was an angel of Heaven who reveled in fighting demons and was damn good at it.  He fought side by side with Jackiel before she was struck down by Arkalonek.

He had a demon lover who he loved very much, but she was executed by Vesmikal while he watched.  This may have contributed to his fall from heaven.

After his fall, he obtained the Mask of Adam and forged Deviltwister, fighting his way up through the ranks of the Hordes of Hell to become a Prince, with the sole goal of killing all of Heaven. He was later reduced in rank to Duke, when Deviltwister was disassembled and its pieces were scattered across the planes.

Allocen also aided the Limbo Underground during its first attempt and was an ally to Zirar. He betrayed them all, causing The Purge in order to retrieve a piece of Deviltwister.

Allocen's original goal was to construct the Deviltwister to exact his revenge against Heaven. After the Occupant sent him to Hell to cool off, he seems to have had a change of heart and began courting Sena Swann for real. After a drug fueled battle of wills, he proposed to her and they were soon married. The wedding didn't go smoothly at all.

Allocen fought The Bloodfather in a duel and saw him slain by Azrael. This released the Horsemen and Allocen was one of the first afflicted by the immortal's plague. After Sena got sick and Skarlin stripped away his rank, he made a deal with Brythervyn and Grimarthiel to kill Mx. Zirar and seige the S.I.N. Casino in exchange for curing himself and Sena. He tried to change the deal and Sena was kidnapped.  After Zirar convinced him that he was just being war's puppet, he destroyed the Mask of Adam and Flatline, then was able to recover his memories of the Occupant and went to the Decrepit Hovel for advice.  He entered the Hovel and emerged with grey wings, having become Transcended as Yarindael had been.  He then went to the Casino entrance, killed The Soulfather and beat the fuck out of Brythervyn until she realized her time in Limbo was up. When Sena finished her novel, He accompanied her to Hell. When they returned, with Sena as a demon, They discussed her loyalty. She fully rejected Heaven and Hell, and Al helped his wife as she transcended.

During the Destabilization Allocen was featured in a flashback, where he was triumphully fighting 3 demons, with Jackiel by his side. 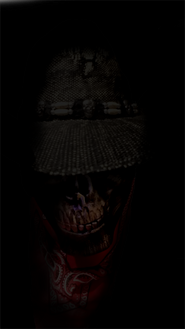 Allocen With the Mask
Community content is available under CC-BY-SA unless otherwise noted.
Advertisement