He/Him
Officer Caim is a right bastard. He is the subject of Caims Photos

What was your life, how did you die? (only what has been revealed)

Officer Caim enforces the laws of Limbo, often asessing fines relative to the net worth of the transgressor.  He was photographed in compromising positions with the angel Ophiel, seen soliciting bribes from Lazarus of the West Gate Wraiths and ignoring a citizen being mugged by the Wraiths while harassing members of the Eastern Ettins.  He is a harsh negotiator and interrogator, but his techniques have turned brutal after Skarlin acquired the evidence on his transgressions. 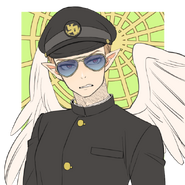