He/Him
Felice is an angel and a member of the Dragons.

Felice has revealed that she was originally created to be stationed on Heaven's Watchtowers.

Felice has mysterious plans to thwart the Great Game by bringing all of the event winners to her side.  She has recruited Pryce Sutherland and Jane Diamond to help her.

When hiding the Dragons from the angel patrols when Martial Law was declared, Felice shed some of her feathers to use in a spell, then later lost a few more when telling Declan and Juliet about the revision to the Great Game. All of the feathers grew back grey, which caused Felice to panic and lock herself in her room. She emerged again when her charges needed her and rescued Juliet and Declan from House Tarquam. 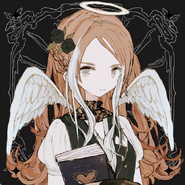