Kilo of the Errer System

He/Him
Kilo Errer is an accounting student at the Bank of Limbo, as well as one of the 3 founders of Friend Pile Kilo. He came to Limbo as a shade of House Mhr, but has since become a skeleton of House Jesifischa.

Kilo used to live in a small rural town until he graduated Highschool. He then moved closer to Niagra Falls for an unknown reason. Sometime in his life, he met his ex, Emily and began dating her. His life eventually ended when Emily's father, Gerald, shot him.

Kilo has talked about his death multiple times, though he seems to have held back each time. The points always repeated are:

During Kilo's crash after his trip on a ground-up angel wing, He was heard muttering about his death. One thing said was: "...her death was my fault... just kill me. It'll be easier..." It is speculated that Kilo's murder may have been assisted suicide.

When Kilo saw into the Living word, thanks to The Occupant's Mirror, he saw Gerald talking to a prison therapist. Kilo is heard muttering "That's not... it's not his fault... I wanted...", further adding to the theory that Kilo died via assisted suicide.

His name wasn't always Kilo. It was originally Oliver. The name "Kilo" came from a childhood joke between Him, Emily, and Emily's brother Thomas (Who was also Oliver's best friend) and it was bestowed unto Thomas. After Thomas had been kidnaped and murdered, Oliver legally changed his name to Kilo in remembrance.

Kilo spent his first day in Limbo working, stealing, and selling his services. After a bit, he became more open and befriended Mx. Zirar, Xander, Korlat, Sebastian, Omni, and Raven .

Kilo was present when the CrabBox broke into House Mhr and attacked, attempting to release the CrabBox that was in a package Xander Intercepted.

Kilo played a part in Operation: Angel Heist. He was supposed to distract the guards, however, when the Accounting Angel went to check on the vault, Kilo took the fall and joined Accounting 101 in order to keep his friends from being spotted.

Kilo is one of the founding members of Friend Pile, a collection of friends that all cuddle up and sleep in a pile. The other two founders were Korlat and Sebastian

When Yarindael Fell and his feathers shed, Kilo was the first to test the properties of an Angel Feather. He did so by grounding up one of the feathers and snorting it. For the first 15-30 minutes after inhalation, Kilo was in absolute bliss, dancing around and singing. In his last 15-30 minutes of his high, he crashed hard. During his crash, Kilo relived the worst moments of his life, and the crash ended with Kilo reliving his death. He had no memory of this trip until 1 hour later.

Around that time, Kilo made the mistake of plucking a Black Feather off the Fallen Angel Yarindael. Because of this mistake, his right palm is now branded with a white marking that matches the shape of the feather he plucked.

Kilo once visited The Occupant and used the Mirror to see how Gerald was handling life. During this visit, Kilo found out that his ex, Emily, was in Limbo. With the help of Mx. Zirar, Kilo showed Emily how to move on from Kilo, thus passing on from Limbo. The last time Kilo saw Emily, she said she was gonna write music to help move on

In his search of more friends, Kilo made the mistake of allowing the Angel Zabizizezel (aka Ziz) to posses his phone. This led to Omni kicking him out of the dorms without giving him any advice on how to make things better. A week went by, and the exile had taken a toll on Kilo's mental health. During a text conversation with Alexys Ocantian, he proceeded to break down. He let Ziz free and started to go on another drinking binge, only to be stopped by Azrael.

Before he could drown his sours in an amber liquid, Az took it upon themselves to fix Kilo. They did this by showing Kilo the deaths of Thomas, Mx. Zirar, and Korlat. They then told Kilo that he could prevent these deaths, so he must protect his family. With those words, Kilo was sent back to the dorms. Shortly after, a fight broke out, and Kilo left the dorms in self-exile, only to be joined by Korlat, and they're newfound friend Byrd.

Kilo, Korlat, and Byrd began to hop between places, finding temporary places to sleep, never staying in one place for more than 3 days.

Since he knew he was going to be in a Limbo Coma for the Auction, He asked Sena to bid for The Unfinished Heart in his stead. They ended up winning the item, and after Kilo received it, thanks to the Declan Delivery Service, he gave one half to Korlat, expressing his love for her

While Korlat was sick in the Limbo Medical Center, Kilo stayed with her, texting all of her friends to come visit.  She started going stir crazy, so he took her on a day date around the North Quarter.  In the Market District , he bought them both Black Orbs and they went to the Decrepit Hovel.  After entering, Kilo woke up in House Jesifischa as a skeleton.

During the Destabilization Kilo had a flashback to when he, Thomas, and Emily had shared a biology class together, and the last day he saw Thomas alive when he and emily drove off after school without him.

After the events of the above Kilo found himself meeting an Allete Robillard, in the Holy Grail and dumped tea on her for being a "Mecha Cuntzilla". After that though, he found himself beginning to grow a fondness for the zombie after she almost started a war.

Some time after meeting Allete, he found members of the underground were getting dragged into signing a contract for a demon named Zarakis. While he himself didn't sign a contract, he watched as those around him began to sign even finding out his wife got dragged into it. He was mad, but ended up helping the underground stop this from happening and helped those who were dragged in get to safety.

Then after that, he found himself sucked up in another situation when he had to help Silas and Allete rescue Inky from the grasp of the Contessa Stryxinara, where he found himself being threatened to be killed had he not given the Contessa the information she wanted. Thankfully Zove helped him, as well as the rest of the underground escape into their dorms. After that point he was forced to lay low due to being hunted by bounty hunters that the contessa hired.

Soon after the situation was resolved with the bounty hunters, he found himself participating in the challenge of Flesh aiming to gain a card to help his family. Ultimately he won the King card of that competition, securing himself a spot in the great game for limbo.

it was at this point, he found himself in a long coma, not waking until October 31st, 2021 where himself and his now sister Allete Robillard went to the Lucky Night, and were met with Felice, who informed them of what day it was, what had happened that kept them in a coma for so long, and how the great game was going. 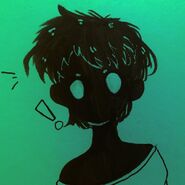 Kilo by Ray of Sunshine 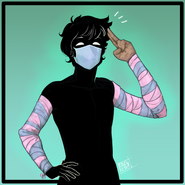