Female
Omni is a Wight of House Gargatel and a member of the rebel group known as The Underdead.

Omni was a wife to a naval aviator with a young daughter and one on the way when her husband deployed. She found out he cheated on her during a port call just a couple of weeks before she was due to give birth to her second daughter. She developed preeclampsia that the doctors didn’t catch until the last second when it was too late. They chose to save the baby through emergency C-section and Omni died on the operating table. This is why she has massive scars across her abdomen which are normally covered by clothing. She is in her late 20s. Her girls and husband are still alive. The girls are about 2 years apart; ages 5 and 3 about now.

After arriving in Limbo, Omni became an early member of The Underdead.  She quickly became a mother figure for them, seeing Sebastian as a son. On a delivery one day, Omni heard a faint meow from one of her packages.  Ske opened it and discovered Kat, who she then adopted.

She became content with her new family and began to move on, but received a Rubber Duck from Dorian which kept her focused.  She sealed that focus by getting a tattoo of a bear from Charlie .

She began a romantic relationship with Mx. Zirar along the way, finally turning it physical after a big night at the Karaoke Bar The two were later married by The Occupant.

During the Destabilization Omni experience a flashback to waiting for her husband to return home, knowing that he cheated on her. She also experienced the evening she gave birth, her death. Texting her husband, saying he needed to pick up their daughter. Her husband was talking to a doctor trying to find ways to help cure her cancer. 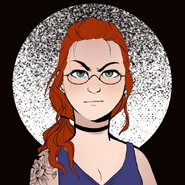