Xie/Hir
Raven is a mover and shaker in Limbo City.  Despite being highly susceptible to the Limbo Coma, Xie has hir fingers in most of the goings on in town. She is now co-owner of The Lucky Night Club along with Kilo Errer.

What was your life, how did you die? (only what has been revealed)

What have you done in Limbo?

After The Destabilization Raven did not wake up right away, until finally awakening during the arrival of the Horsemen of the Appocalypse.  She was quite sickly and wasted away.  It was revealed that she's an Empath, reflecting the strongest personalities in Limbo. 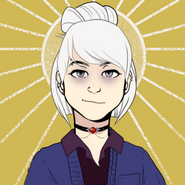