Limbo Wiki
Register
Don't have an account?
Sign In
Advertisement
in: Characters, Player Characters, The Underdead,
and 5 more

Formerly a Duchess of Hell

She/Her
Sena of Zorn is a Transcended Demon and a Former Duchess of Hell, due to her marriage to Allocen, Former Fallen Angel and Duke of Hell, now Transcended himself.

Sena in life was a writer, working on finishing her novel. An unfinished book doesn't pay the bills, however, and she turned to running a small drug ring to stay afloat. One day, after a drought of lack of motivation and the depression finally overwhelming her, she overdosed on her own supply, ending her life.

Due to the nature of her death and her downward spiral into addiction in the last few months before her death, she doesn't remember most of her life. When Leon found his book that revealed portions of his and Amostia's lives, it was discovered that Leon and Sena shared a father and are brother and sister. When Sena expressed her desire to write to Leon, he condemned her wishes and left for medical school, leaving her alone and dependent on drugs.

After being shot in the back during some gunplay with Allocen, Sena had a flashback that revealed she had accidentally started a turf war with a local gang by dealing to their clientele. After not heeding their warning, she was cornered in an alley one night, where she was shot and left for dead. She survived after a neighbor found her bleeding out and called for help. It is implied that Sena had further encounters with this gang and that she had to use deadly force to protect herself at some point.

Sena owns The Overdead Cafe (Formerly the Underdead Cafe) and is was a founding member of The Underdead gang. She stans for Allocen. After the events of Lastsume's Last Stand, there was a rift among The Underdead. Sena, Leon and the newcomer Bane made a blood pact with Allocen, swearing to never work against him and he swore to never kill them. This pact symbolically separated them from the rest of The Underdead, making them The Overdead.

She went to live at Castle Zorn after Allocen was sent to Hell by The Occupant.

When he returned, she began to forge that relationship for real, finally consummating it shortly after she opened her second business Sinsations

She helped Allocen destroy the Paellician that had escaped his employ and developed their relationship, sometimes helped along by a lot of drugs. During a drug fueled contest of wills, Allocen proposed marriage in order to win their game.  It turned out that he meant every word and in a short time they planned their wedding and were married.  The wedding did not go smoothly.

During the events of the Destabilization Sena was featured in a flashback where, she was revived through CPR after falling unconscious, and unbreathing after taking too much of something.

Sena eventually completed her novel, completing her unfinished business, and went through the gates to Hell.  She soon re-emerged as a demon. Due to her attachment to her husband and her complete rejection of both heaven and hell, her wings soon shriveled and shed, causing all of her demonic blood to bleed out.  They then grew back as grey, marking her as having Transcended 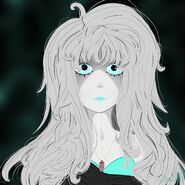 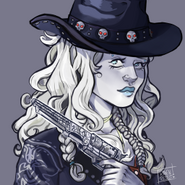